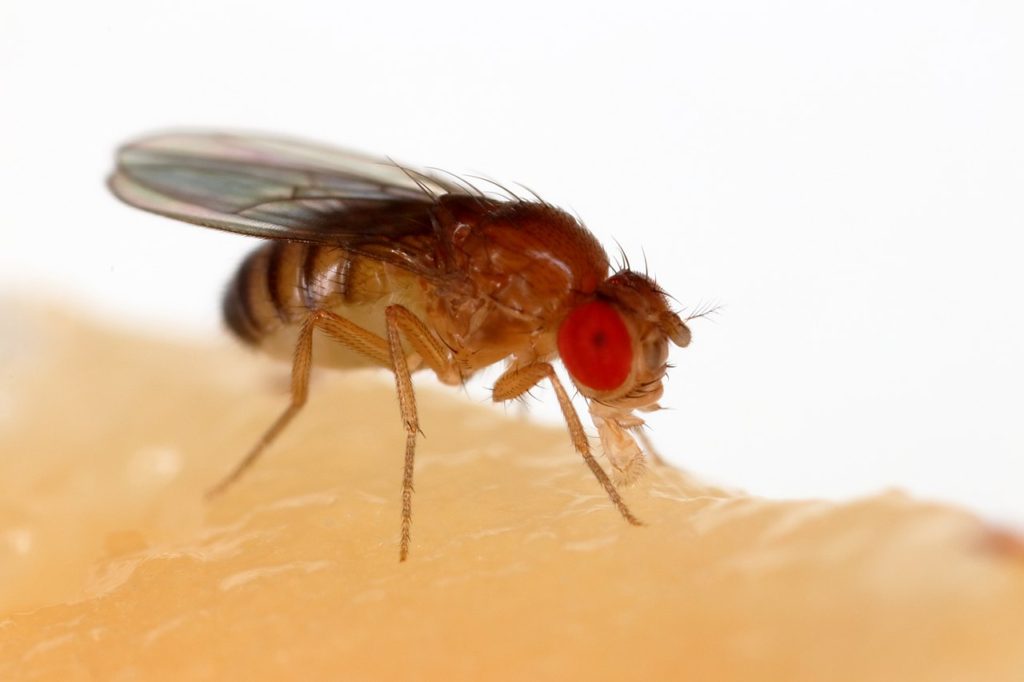 It’s the third day of the first lunar month and traditionally people are not encouraged to meet other people lest they might end up having unnecessary argumentation or discourses. Well, we haven’t left our flat since our visit to Su’s parents’ place on the first day of the CNY and we have been rather content with simply eating, drinking and sleeping in between. I was enjoying the solace and serenity with a glass of 17-year-old Glengoyne in one hand and some home-made whatever in the other when I was visited by my drosophila friend which decided to rest on the rim of my favourite mug. Now, this is a member of the common fruit fly whose proper name is drosophila melangaster and which name means dew loving from Greek. I have an affinity with drosophila since I was an undergrad of HKU when we were required to employ members of the species on various experiments, not only because they reproduce fast, but also because their four pairs of chromosomes can reputedly execute more than 90 to 95% of the functions of the 23 pairs of chromosomes that human beings have.

We are regularly visited by fruit flies in the dining room, but normally only one or two and I am used to their presence. Sometimes I tried to catch them between my two palms, but I was seldom able to do that. Today, I had reflexively cupped my hand on the mug which resulted in the fly going into the water in the mug. I thought it would be drowned and it appeared so. To boast to Su my agility and reflexes, I showed the mug to Su who was impressed, but who also noticed that the fly was struggling and was trying to move to the side making use of the surface tension. I remarked that it would be battling against Nature like a dinghy in an ocean trying to get ashore. We paid no attention to the mug until some minutes later when I found that the fly was no longer in the water. My drosophila friend had either escaped or evaporated. Suddenly, a peculiar sense of awe and mindfulness came over me. Now, it seemed this being with only four pairs of chromosomes has accomplished what a being with 23 pairs probably couldn’t in similar circumstances. It’s indeed food for thoughts.

The progress of mankind marked by the advancement of knowledge could be attributed to man’s incessant search for new grounds and vistas. Christopher Columbus managed to convince the Spanish King of his time and managed to set off in three ships or boats in August 1492, expecting to find spices in the East Indies but ended up in the American shore or the new world two months later. It was of course Magellan who later proved that the world was round and despite not being able to reach home, had one of his ships Vittoria limping back with plenty of spices which were what they set off to look for in the first place. I can’t help feeling that Columbus and Magellan were battling like what my drosophila friend was; and Magellan didn’t survive.

The feats of Columbus and Magellan had inspired many other voyages. There was, for example, Captain Cook (1728 – 1779), or James Cook, the British explorer and cartographer who was attributed to have discovered Australia and then Hawaii where he died. In the notes he left, he had said that the West or himself had brought diseases and discords to places which were once quiet, serene and diseases free. Then there was Captain Bligh (1754 – 1817) made famous or infamous after the mutiny on HMS Bounty which was under his command. I recall vividly that Mutiny on the Bounty was a set book by James Normal Hall in my school days, but that would be another story. In any case, the episode was turned into films and the isolated Pitcairn islands have since become famous though still largely uninhabited. The last population count suggested that there were less than 50 people there.

Back to my drosophila, I suppose it has survived and is hiding somewhere nearby, which is what would be the essence for survival. History has recorded that people had survived just like that. There was Claudius (10 BC to 54 AD), for example, who was the nephew of Tiberius and a grandson of the wife of Augustus, who never by any imagination of his would become anything significant. Augustus had died in 14 AD with no apparent heirs, and Tiberius (42 BC – 37 AD) became emperor. However, Tiberius died like Augustus without an heir and a bloke called Gaius Caesar (12 – 41 AD) became emperor in 37 AD. Gaius Caesar, also known as Caligula was reputedly a mad person or very good at pretending to be mad, so much so the soldiers found him unbearable and murdered him after he was in  the throne for four years. Those of you who have a taste in classical films produced by a magazine which propagated explicit human morphology would have come across a film by the name of Caligula which was not allowed to be shown in public arena. After he was murdered, the guards found Claudius cowering in a corner of the palace expecting to be put to death. But the guards made him emperor. He would have been OK emperor. Indeed, BBC made a 12-episode drama – I, Claudius – in 1976 directed by Herbert Wise, which was screened on TV in HK.  The long and short of it is that Claudius was poisoned by Agrippina, the woman he picked for his downfall, so that the throne was left to Nero (37 – 68 AD) who became the most hated tyrant in Western history. Such is how history has been chronicled; and I suggest my drosophila friend would have been no better or worst in the scheme of things in the universe as it flitted off my mug into nowhere.

I hope to talk to you again soon.

Bad weather has often prompted me to write a thing or two. Well, it can’t get any worse, or so it seems. Typhoon Signal No. 10 was up for some ten hours or the good part of the day as everyone in Hong Kong exchanged and shared the woes experienced in many districts and areas….

I thought we were on Robinson Crusoe’s island or its derivative, or that we had walked into an abandoned set for location filming of some low budget films copying Cast Away which had made Tom Hanks famous. All the furniture were made of broken wood pieces like from ship wrecks, planks, plastic containers, sawed open…

We had just returned to our room in Whistler Hilton after about three hours of skiing including going up and down the gondolas and chairlifts when we picked up our cell phones and learned that Reverend Father Alfred Joseph Deignan (Father Deignan) had passed away in the small hours of Tuesday 11 December, Hong Kong…

Helen and Herbert’s Year Ender arrived last week, which prompted me to start composing mine. These days, fewer people are writing or sending out year enders, which used to be chronicles of their travels and updates on their children and grandchildren, complete with colourful and rather interesting photos. Covid-19 and the pandemic which followed had…

Let me begin by thanking all the friends and acquaintances who have been creating, sending or routing messages and greetings with their best wishes for the holiday seasons and the year ahead. They began to come in around the second week of Advent, normally through WhatsApp, Facebook, emails or other social media. Some are long,…