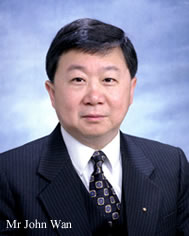 This is my personal website and I need to thank many friends for technical support in general and for getting me here in particular.

I had this page set up shortly after I stepped down as a Rotary International District Governor. That was 1 July 2001. A lot has happened since, but I am still keeping my photo taken in 2001. I have since retired from public life, but I still lead an active life and would love to communicate with any like-minded or not-so-like-minded individuals on any aspects of life.

The first postings on the website were all Rotary related. A bit later, I began writing in the format of letters on a variety of subjects which I did haphazardly but mainly while I was travelling in recent years. They are grouped under the respective categories with self-explanatory titles. In July 2015, I was elected Chairman of Convocation of the University of Hong Kong, which is a statutory body comprising all graduates and teaching staff of the premier university of Hong Kong, with membership then numbering over 162,000 and still counting. In an effort to reach my members,  I started a “Chairman’s Column” on the Convocation Website; and at the same time generated a new category on this site, called “My Chair Days” to keep all the letters I have written in one place. In September 2016, I decided to leave this job, meaning that there won’t be additions to this category. Again, for management reasons, I started a new category “A New Chapter” in which I would put whatever I am going to write; and I didn’t know what I was going to write. In 2017, and having survived my first trekking experience in Nepal, I started yet another category with the long awaited title “My Travels” to which I would put my thoughts from my travels, beginning with Nepal. Somehow, I became lazy and did not write much in the last two years. The year that is about to end saw me posting only two articles, or three if one counts the Year Ender posted on 29 December, which I began by calling 2019 as a momentous year that would mark the beginning of a new epoch in the history of Hong Kong. I ended with an optimistic note that I would continue to write.

Today is New Year Eve of 2019 and tomorrow marks the beginning of another decade; and I wish you all well.